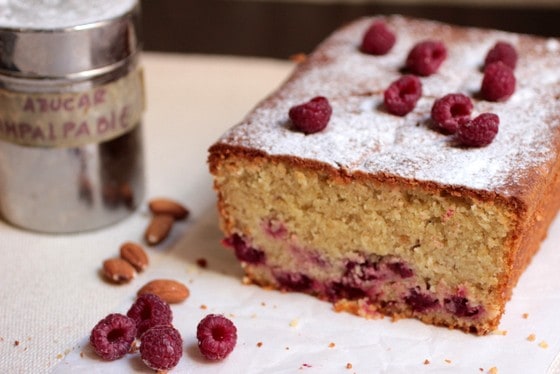 I have to be honest right away, just like with the cheating on winter pea soup.
This is almost Pierre Hermé's recipe because the rose syrup is probably not what it should be. And I say probably because,
having no idea what it tastes like, and, knowing there was none available here with that name that I know of, I gave up looking any further for it. I really never put much effort into it to begin with.
I infused a simple syrup with rose water.

With that out of the way, I must say that today's recipe for French Fridays with Dorie group, Ispahan Loaf, is simply stunning. Something I obviously expected from a Pierre Hermé recipe. He developed a line of desserts with the name Ispahan, which is a name of a fragrant rose and the old capital of Persia, as Dorie explains in the book.
At first sight it's a simple loaf cake with almond flour and fresh raspberries. Well, it is and it's not. The method of mixing begins like a macaron, with almond flour and confectioners' sugar being sifted and egg whites beaten. But then it changes completely with butter, egg yolks and flour.
The beaten egg whites are added at the end. And then it's baked in a low oven for a cake. I had to crank it up a bit after half hour or more, because the cake was still too wet and it didn't seem to be going anywhere good.
So the last 20 minutes or so where at 325ºC. Next time I will bake it all at this tº from the start. 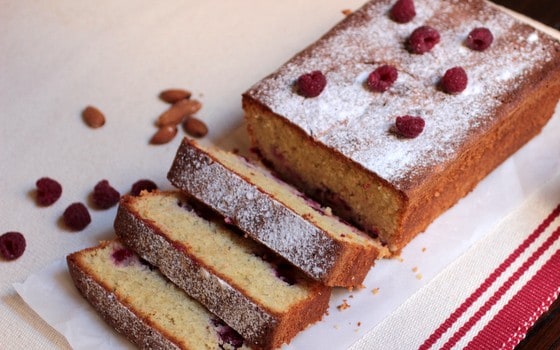 Though there's nothing that stands out much about the list of ingredients or the mixing method, it probably has to do with the amounts of the former, because the cake is soft and has an interesting texture. Though it looks compact and, in my case, barely rose in the oven, it's not dense at all. But it's not light either. It's just right.
Since I didn't follow instructions, because I didn't read the recipe carefully, and just scattered the raspberries in only one layer, they sank. Next time I will take the time to make two layers with three rows of raspberries each. It looks so pretty when the berries are scattered all over.
A fantastic almond raspberry loaf cake, to serve with a nice cup of tea or even hot chocolate. Or to snack during the day. Or night while working, if you're a night owl. Or take as a gift to a friend's house. 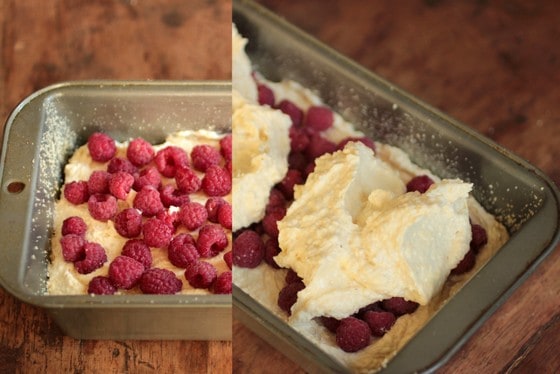 My cake had a very faint rose something in it. It wasn't even a definite after flavor. I kind of went easy on the rose water with the syrup, because it can feel a bit soapy sometimes, and I wasn't about to spoil this recipe with fresh raspberries that I love.
On another note, I second Cher, who has ideas about varying the flavors, with blackberries for instance.
This is definitely a cake that is phenomenal as a base for many other combinations.
Almonds go with so many berries and fruits and flavorings that it's worth trying it again. And again. And again. 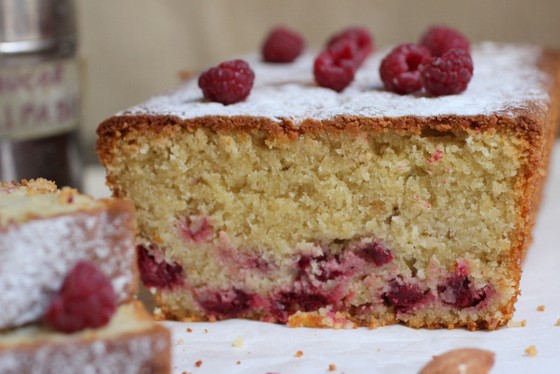 By the way, I always thought all the Ispahan creations included lychees also. I wonder why they were left out here. If we had to go online to buy rose syrup, buying canned lychees is a piece of cake. I'm very intrigued as to what it might have tasted.
Print

I made only one row of raspberries, and they obviously sank to the bottom. So it might be better to follow the instructions.

I'm Paula, a baker for more than 30 years and your designated recipe finder, sharing the best ones on this blog, with simple ingredients + easy-to-follow instructions.
Previous Post: « Creamy Fudgy Devil's Food Stout Squares
Next Post: Orange, Raisin and Almond Couscous »