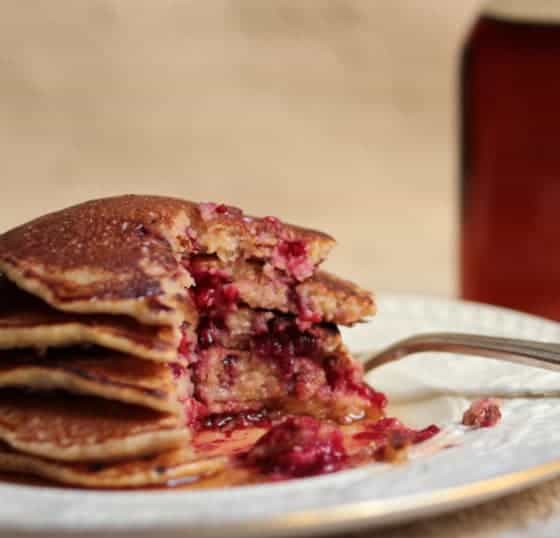 These Cornmeal Berry Pancakes come with a story. In a nutshell, goes something like this:
In the mid/late 40's my paternal grandmother had developed a line of instant cake and pancake mixes, had spent a year or more developing it, had registered a name and was ready to give it a go, an idea that had started with my grandfather, her husband, after he had gone to college in the US, Cornell University to be precise in 1918, and came back in love with boxed mixes, especially
pancakes.
Some kind of argument happened between them, I assume a huge one, that no-one knows in detail, put an end to her dream due to an unexpected decision on his part to back out of the whole thing. 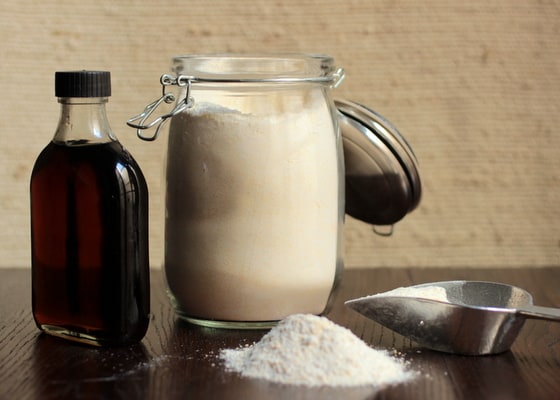 My father's parents were a very interesting pair, with avant-garde lives for their time. I didn't know him, he died a year before I was born, but my grandmother is my connection to food, I made my first recipe, an apple crisp which was my first post also, with her, and until she died almost three years ago at the age of 90, the only person in my family with whom I could talk about food the way I like, that is for hours, in detail and with unabashed excitement. 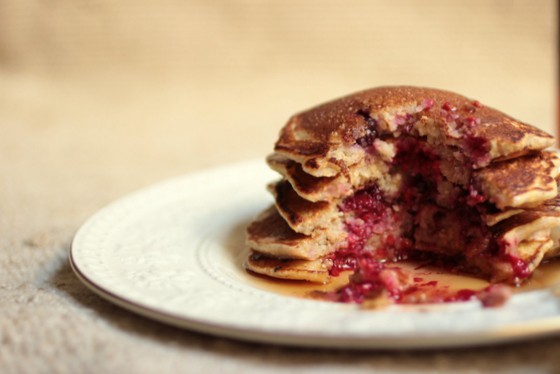 I grew up with my father eating thick, fluffy (American) pancakes whenever he could, something very unusual in this country, and a very hard thing to pull off in my home, due to my mother's marked lack of skills in the baking and cooking section of married life, except for a few dishes that involved an English roast, a corn pie, porridge, polenta, a stew or two and not much else from what I recall. 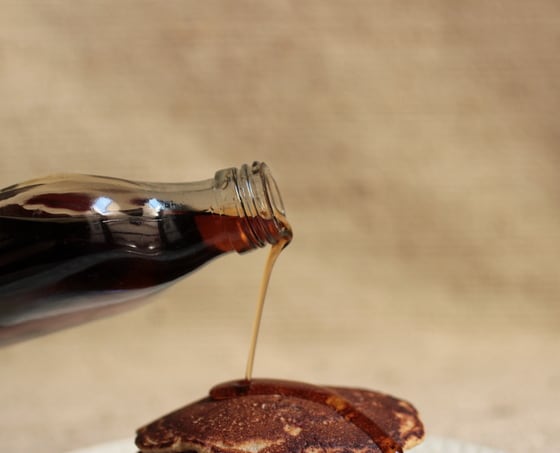 It always struck me as odd that my dad would have such unusual tastes. But a few weeks ago we got to talking about the pancake mix episode, and besides giving me a few extra details that really didn't explain the real reason as to why the whole thing was suddenly stopped, he reminded about my grandfather's college days studying engineering, and how he had come eating cereals and pancakes.

So that's the reason my grandmother made them and my father in time became addicted. 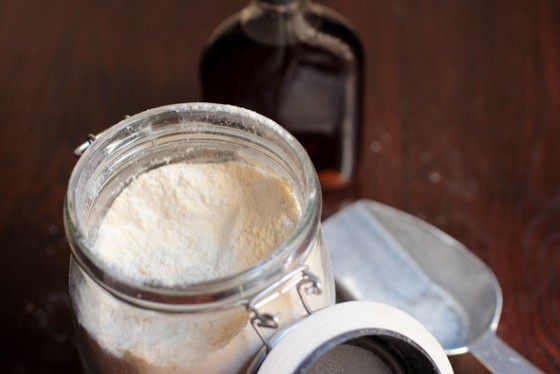 Especially now, that I'm so into cooking, baking and all things food related because of this blog, I wonder what would've been to have my grandmother introduce the first boxed mixes in this country. Since I'll never know, I decided to celebrate today with some homemade pancake mixes and homemade maple syrup.
If you're thinking that it is a weird recipe to celebrate valentine's day you're right. Because what I'm celebrating today is this blog's 1 year anniversary, my little baby who made the last year so ridiculously rich, interesting and exciting, a feeling hard to explain because food blogging is mind-blowing. 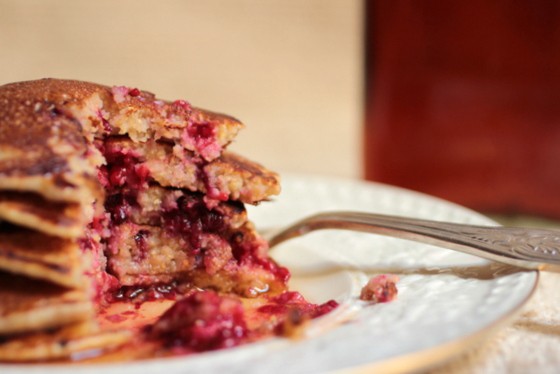 Two of the best things in life come together, my love for food and a place to make probably the most amazing and fulfilling virtual friendships a person can hope to have, a topic that amounts to a post in itself that will be up on Saturday, a luscious dulce de leche mille feuille dedicated to everyone who reads this blog.  Because you have a place in my heart. A big one.

On to our recipes today. I started this blog thinking of my grandmother who let me into this magical world of cooking, so I
decided to make some pancake mixes and homemade maple syrup, the latter really a need I have since I'm hardly able to get the stuff here. I have resorted to the homemade mix of sugar syrup and maple extract, which is artificial I know, but has the flavor that I love so much, and besides it's either that or nothing. So there's no discussion. 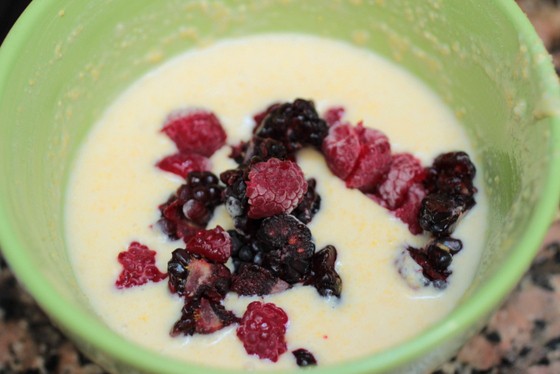 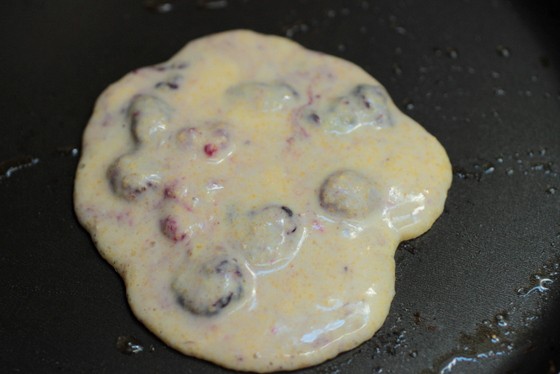 As you can imagine I gave the first homemade pancake mix to my dad together with the homemade maple syrup and he was beyond himself, happier than a dog with two tails.
That is after making these for the post and eating what is missing. They are phenomenal. The pancake mix itself is perfectly balanced, right down to the amount of salt, a recipe I found at Chez Us, a site that combines some glorious pics with great recipes. This is one of them. 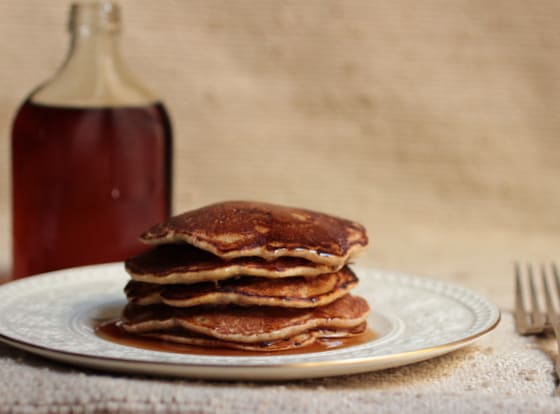 The addition of berries is a happy one. I particularly like the pronounced tartness of the raspberries and blackberries (I used some I had frozen myself) with the maple syrup. This type of food is what I believe makes breakfast-all-day so appealing. Be sure to cut the berries in pieces, especially the blackberries, otherwise you can't get a flat pancake.