Once you make homemade marshmallows, there's no turning back.
These are fabulous, vanilla-flavored pillows that are really easy to make if you organize your ingredients and space beforehand.

I finally made homemade vanilla marshmallows. Forever in my bucket list, I gathered my thermometer, bought some corn syrup and got to work.

Making marshmallows is not hard, but it takes focus and some organization. But doesn't everything?.

After my fluffy, white, powdered sugared, pillowy squares were done, I felt I should've ventured into something really adventurous for me like a whole fish, which I hate, or boned and stuffed a whole chicken, but well, I wanted it to be fun too, and hey, there's no complaining when there are homemade marshmallows in the house.

One of my favorite comic books ever is Asterix. I think I read every single one of them, and whenever I find one I read it again. There's a particular scene in Asterix in Switzerland, where they have a huge cheese fondue, and, this being the times of the roman empire and its decadent ways, they play a game that is lost by whoever loses the piece of bread inside the pot, with outrageous consequences for the poor soul, and it all ends with most of them coated by cheese. It's hilarious.

What about the marshmallows right? Well, there are so many stories about impossibly sticky situations in the kitchen when making marshmallows, the mixture coating half the counter, floor, mixer and so on, that every time I thought of making them, I always remembered this scene from the comic book, and was afraid me and my kitchen would go down a similar road.

Of course, extreme precautions were taken, so it was a walk in the park.

One of them involved the spraying of the pan, which is so emphatically suggested so they don't stick when unmolded, I was certain not to miss it.

I used a butter-flavored vegetable spray, which is awful I know but nothing does it better than the spray, and coated the heck out of every inch of that pan, and made sure, very sure, there was no possibility of it sticking and not unmolding as it should. It certainly did, together with a yellow stain which was very visible.

So go easy on the spray.

Besides that, these are superb vanilla marshmallows, though I'm not much of an authority on the subject, just like with the graham crackers, since I don't have the commercial ones to taste against. I'm pretty sure not being able to get a hold of those is a good thing.

So it's homemade vanilla marshmallows for me or nothing. I don't mind. After today, knowing there is no sticking involved if I'm careful, I can say the adventure will be the many different flavor possibilities.
Table of Contents Hide
A few tips to make your marshmallow-making easier and as un-sticky as possible:
Homemade Vanilla Marshmallows

A few tips to make your marshmallow-making easier and as un-sticky as possible:

There are some recipes that use egg whites too. I didn't have any and this recipe doesn't use them, which is the one I wanted to try first. So much easier. 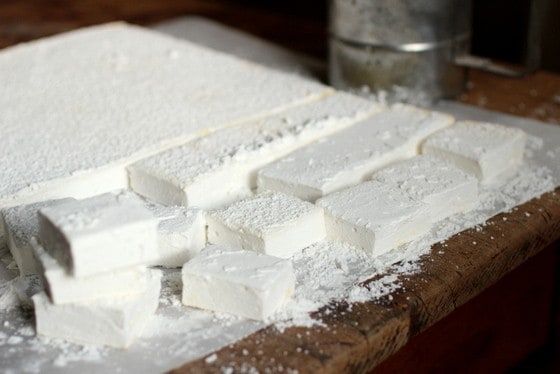 barely adapted from Tea with Bea, by Bea's of Bloomsbury