A few months ago I pretty much started filling up bottles with vodka and throwing ingredients inside; a let's-see-how-this-goes situation. A few wonderful recipes happened like the homemade hazelnut liqueur and the raspberry one I used in my favorite with favorites chocolate cake. There was half an almost-dried vanilla bean, tightly wrapped in plastic, my idea of preventing it from drying with bad results, and two lemons, which had been part of a few pounds intended to make preserved lemons; while the latter still belongs in my to-do list, the lonesome piece of vanilla found the bottom of a little glass jar filled with lemon peel and vodka, followed by simple syrup. Homemade vanilla limoncello was born, following my friend David’s recipe. And then I forgot about it. For months.

I should’ve been a chemist, I know that now, but food chemistry is so much more fun. A few months ago a friend of mine who is an excellent chef, told me he had started studying chemistry before deciding to follow a n very successful culinary career, and since I know I pondered the idea for a while after finishing high school, I have a feeling there are many frustrated chemists among cooks and bakers.

Anyway, the forgotten bottle mentioned above, transformed into a light yellow hued liquid and the vanilla bean was transferred with the limoncello to the final bottle.
And then it was forgotten for a few months again. Not intentionally, but it did. And a lot can be said of the flavor force a broken, almost-dried vanilla bean has. The liquor mellowed to an almost sugary acid candy flavor with a marked vanilla undertone. Very different from regular limoncello, almost incongruous with what I was expecting, sending my frustrated chemist mind into brainstorming mode, because it’s made for baking, from a simple cake to a magnificently flavored limoncello ice cream. Coming tomorrow, I promise, because right now it’s getting late to post this and I didn’t have time to add that recipe. But it’s worth waiting.
Print 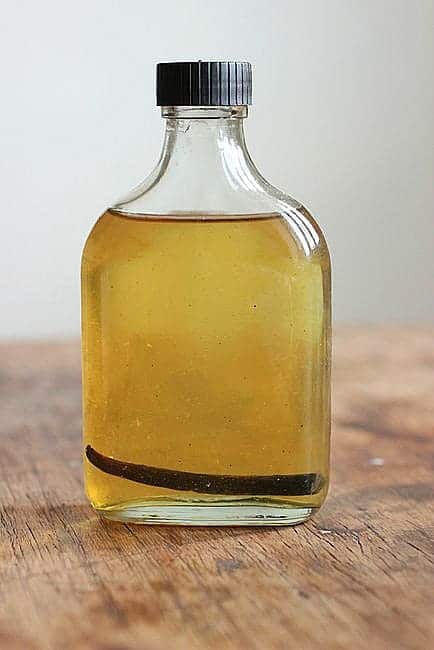 from Cocoa and Lavender