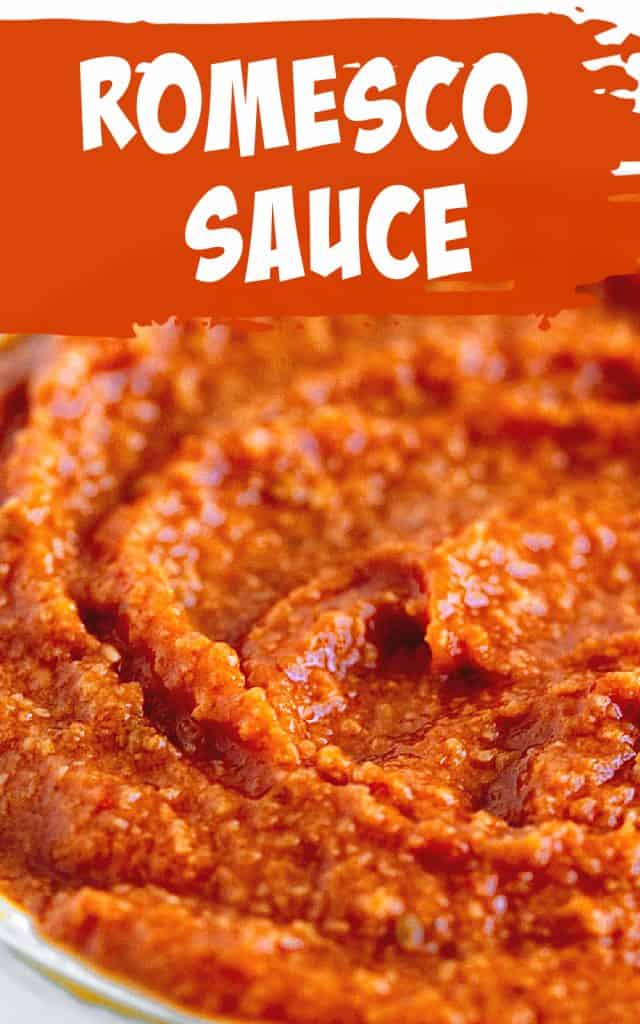 If you never tried this fantastic sauce, you should asap! It has roasted tomatoes, red peppers, almonds, and a few other ingredients. It comes together quickly and is good for pasta, sandwiches, as a dip, with fish, chicken and more. This might be my favorite sauce ever. I make a large batch and eat it every single day until it's gone. True story.

Table of Contents show
What is romesco?
Main ingredients
Roasting the vegetables
How to skin almonds
Simple steps
Storing it
How to serve it
Meal prep
Easy Romesco Sauce Recipe
Ingredients

It's a tomato-based sauce originated in Spain. There are several versions, and, similar to gazpacho, some have bread and some don't.

I was taught this recipe by a Spanish woman who wouldn't even think of not adding bread, so I'm following her lead. After experimenting a bit, I find that the romesco sauce with bread is superior to the one without.

I'm a strong believer in this romesco sauce recipe as written. It's so delicious, there's no need to make changes.

What is up for debate is the proportions of some ingredients. So there I think you can adjust to your personal taste. After several tries with different combinations, I like it exactly as is in the recipe card. But feel free to adjust. Maybe you like a lot of garlic or more tomatoes. Your call.

This method is the best because it concentrates the flavor and adds a natural caramelized flavor that is amazing.

As you can see in the images below, you only need to baked them in a medium oven until charred, wrinkled and maybe slightly burnt here and there.

How to skin almonds

It's very easy, simply cover almonds with boiling water, let stand for a few minutes and then slip off the skins with your fingers. They will have separated from the meaty almond.

See the step-by-step in the videos below 👇🏻

You need an immersion blender, my first choice, or a food processor, my second choice, for this sauce. A blender would work also, but the sauce it thick, take that into account. I, personally, find it annoying to take out the mixture that is at the bottom of the jar, so I rather use one of the other options.

How to serve it

This is a tomato and red pepper-based sauce, so it's fantastic with fish and chicken, especially grilled IMO. I love it with pasta, love it! Also as a spread for sandwiches or as a dip (with the olive oil crackers for example).

I love it with potato wedges! Bake the potatoes as directed in the Parmesan Potatoes post, and then dip in the romesco sauce (image below).

Vegetables: you can roast the vegetables a week ahead and keep in a jar with olive oil and a tight lid. Don't drain them and make sure to add less oil when making the sauce.

Almonds: you can skin them several days before, dry them in a very low oven (don't let them toast, only dry out so they don't become soggy), and keep them in a jar with a tight lid.

Let me know in the comments below if you make this recipe! I’d love to hear what you think about it. Thank you for being here, I appreciate it a lot!
Let’s connect via Facebook, Instagram, and Pinterest.

This tomato-based sauce is delicious, comes together quickly, and keeps well. Great with fish, chicken, for pasta, sandwiches, and more.

I'm Paula, a baker for more than 30 years and your designated recipe finder, sharing the best ones on this blog, with simple ingredients + easy-to-follow instructions.
Previous Post: « The Perfect Sour Cream Cheesecake (with video!)
Next Post: Blueberry Oatmeal Muffins »