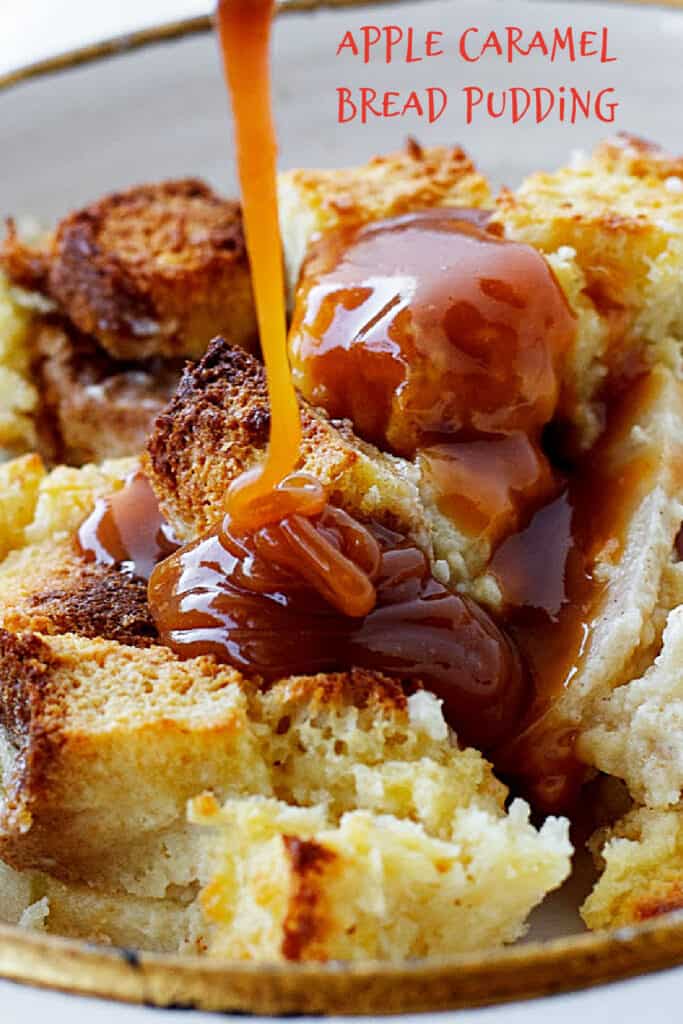 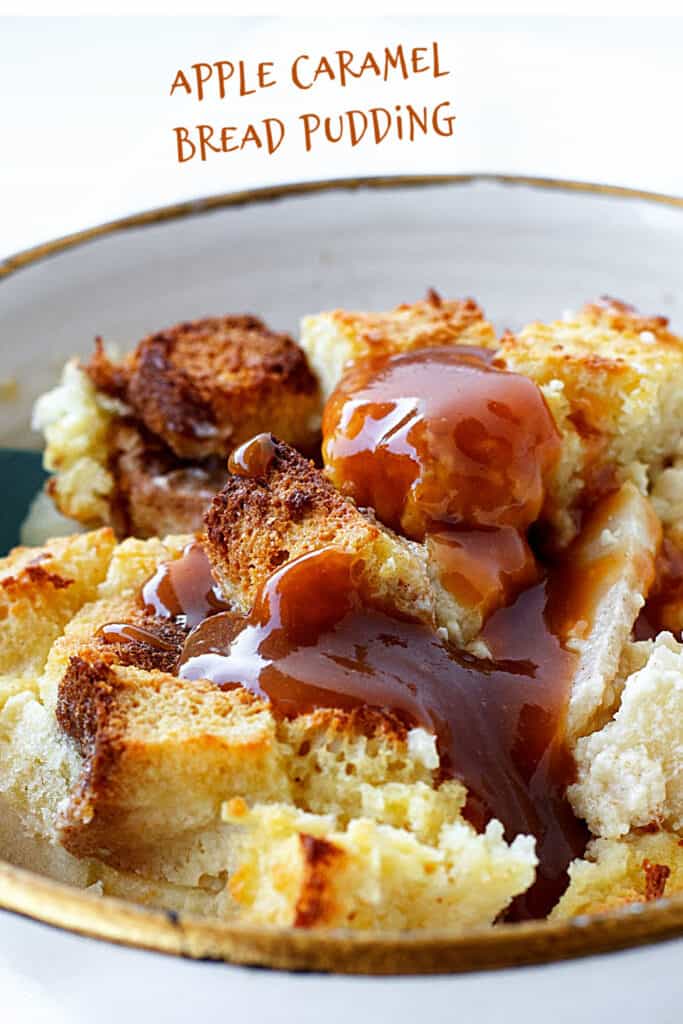 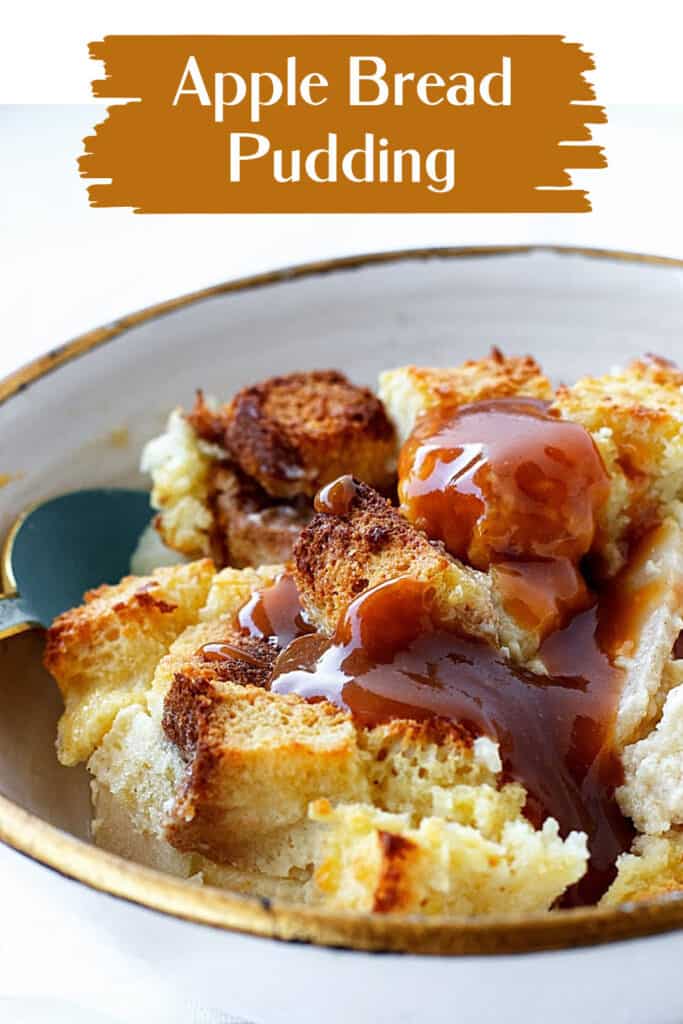 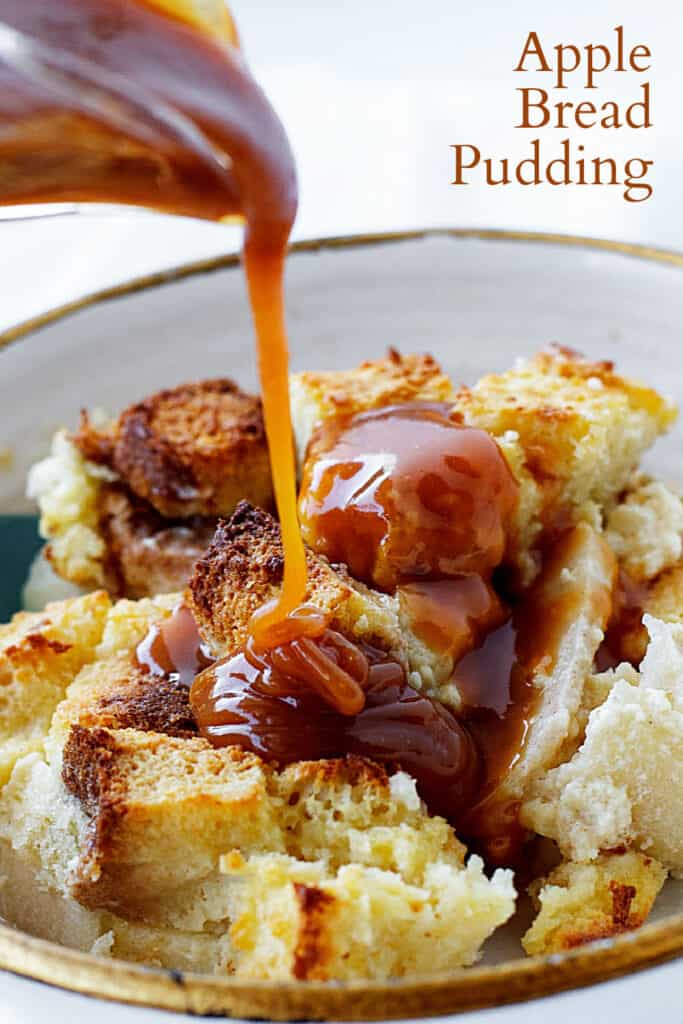 A fantastic apple dessert. It has a layer of soft cinnamon apples topped with sweet bread cubes and a vanilla custard mixture, baked until creamy, and served with gooey dulce de leche or caramel sauce. Comfort food at its best.

As an Amazon Associate, I earn from qualifying purchases. Please read my disclosure policy.

Originally published in January 2013, this post has been updated with text and images to serve you better. The recipe remains the same because it's awesome!

Most countries and cultures have a way of using stale bread. Many involve a custard, whether a bread pudding or french toast.

This apple bread pudding recipe is no exception, and it's the perfect dessert for the holiday season when we usually have leftovers from brioche, challah bread, panettone, pandoro, Scandinavian pulla, etc.

It's highly recommended to serve it with a sauce, ideally caramel or dulce de leche, and enjoy a caramel apple bread pudding, which is the ultimate flavor combination for fall!

Table of Contents Hide
Two parts to this recipe
Ingredients
How to make this pudding
Kitchen notes
Frequently asked questions
Related recipes you might like:
Caramel Apple Bread Pudding

Two parts to this recipe

Together, both layers are magic!

How to make this pudding

Making this dessert is easy and quick since the bread cubes don't need to soak a long time before baking, as it sometimes happens when using stale French bread.

The first layer consists of apple slices lightly cooked in butter, sugar, and cinnamon. This step adds more flavor and color, and it's worth it.

A few important comments about what bread to use and how to cut it.

You only need to whisk or stir the custard, not beat it.

You want the eggs to be completely integrated but not incorporate extra air into the mixture so that it doesn't rise or puff too much during baking.

The top will bake to a golden brown, especially with an egg-based bread, and it will look like it's done when the specified time in the recipe is up.

But, and this is a big but... always make sure the inside is creamy but completely set, fully baked. You don't want it to be still liquid because it means that the eggs are not set. It will be soupy and not good at all.

Are you supposed to eat bread pudding hot or cold?

It depends on how you like it, as both ways are fine. I like it warm with dulce de leche or caramel sauce and sometimes with a scoop of ice cream. But plain apple bread pudding is fantastic.

How do you know when bread pudding is done?

The top will be golden, and the creamy inside will be firm. You can use a cake tester or toothpick; it's done when it comes out clean. You can also lift the top layer in the center with a fork and see if it's still liquid or not.

Can bread pudding be refrigerated overnight before baking?

Yes, it can. Make sure it's covered. The bread in this one is very soft, even if it's stale, so there's no need to soak it for a long period. But you can do it if you want to bake it in the morning, for example. The texture will be more uniform as the liquid will be absorbed more.

Is bread pudding supposed to be soggy?

Yes, but in a good way. It's baked bread with liquid, so it does soften a lot. Make sure it's properly baked, so it's not mushy. There's a difference between creamy and soft versus soggy and mushy.

Can bread pudding sit out overnight?

No, it's not recommended. There are eggs and also fruit, which tend to ferment. So refrigerate what you're not using after a few hours, well covered.

Let me know in the comments below if you made this recipe and loved it and if you had issues so we can troubleshoot together. I love to hear what you think, always. Thanks for being here. It's much appreciated.
You might also consider subscribing to our FREE email series to Boost your Home Baking Skills! And our regular newsletter.
And let's connect via Facebook, Instagram, and Pinterest. 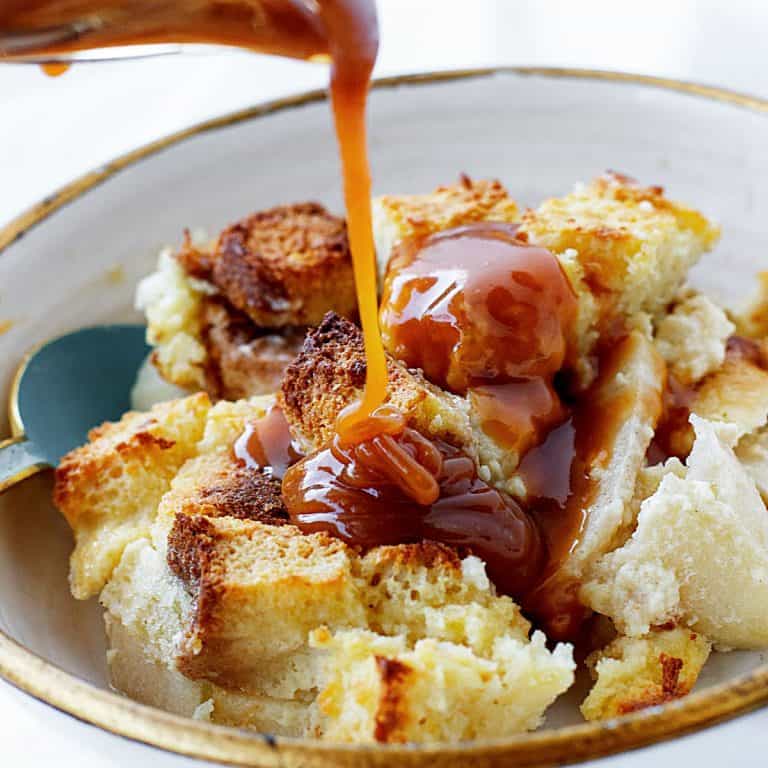