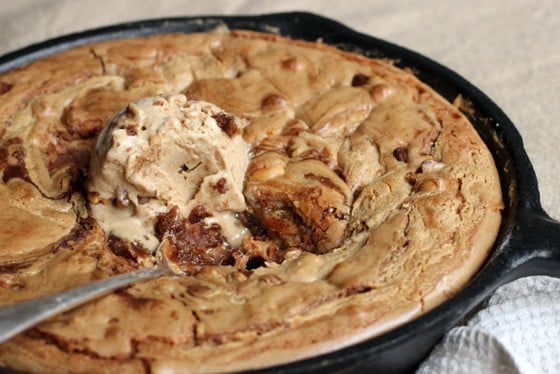 If I knew back then that the cast iron skillets I saw growing up would be so hot right now, I would’ve kept them. And trust me, I do keep stuff longer than needed, but you don’t lug lots of kilos of iron just because.

Finally, I bought a new one a few weeks ago at the nicest little shop, with all the right pans, kitchen towels, molds, glass jars, a perfect foodie paradise, which only needed a stove and oven and I could well believe it was my kitchen. Not because it was like my kitchen, it was a wishing moment. One day.
For now let's concentrate on these cinnamon peanut butter blondies, made in the skillet and topped with a creamy toasted cinnamon ice cream. The spoon is mine. I did eat a lot of it, still warm, gooey and contrasting with the frozen cream, decadence beyond the winter day outside. 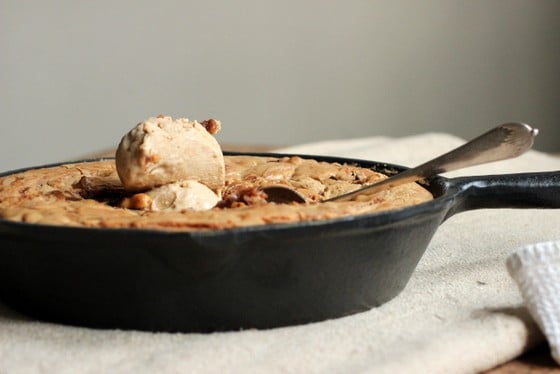 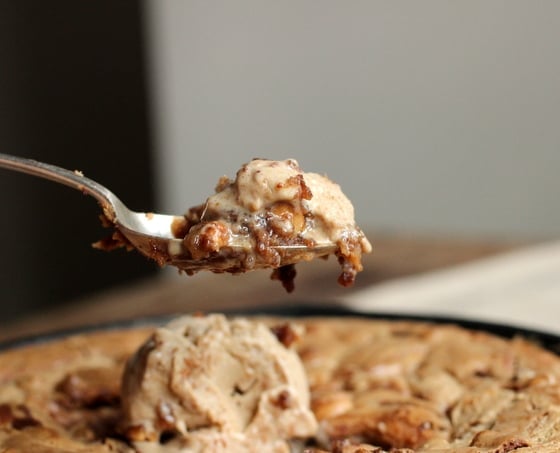 Also, who knew I would be sharing a very cinnamony recipe for an event today. Spices always take me to savory ideas first, always. A steaming egg curry, dry rub on ribs, spicy chutney, you know salty, vinegary, fiery. Not dessert. Or so I thought.
What I knew was that I would be making some sort of skillet cookie or brownie to break my new iron pan. Maybe call myself an iron baker? ha

I played around with the peanut dark chocolate blondie recipe many times, it's so versatile and the flavor of chocolate chips cookie dough is almost like a canvas, add to it any nut or dried fruit, even a few tablespoons of a sweet liquor and create a new bar. 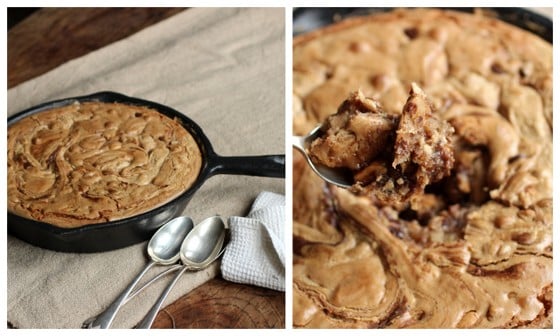 What if we make the dough from scratch in a cast-iron skillet, add some swirls of peanut butter, salted peanuts and swirl a little bit more to make the chunks of dark chocolate melt just the tiniest bit to stain the batter but not so much?

A few recipes had stayed anchored in my mind, black skillets, melting butter and puffy doughs coming out of the oven, banana flavored, chocolate and mint. 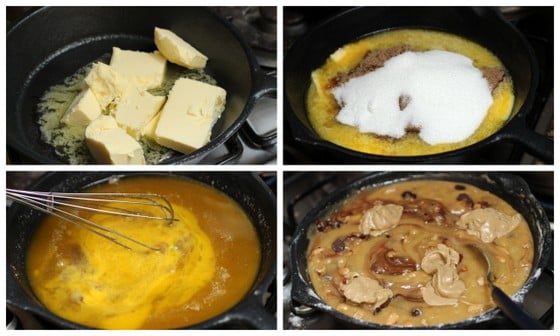 This spicy party deserved the best cinnamon I had, a Vietnamese powder I bought in a suitcase with me from a trip. Yeah, I bring oils and spices in my luggage. Totally worth it when I can't find the same here.

I'm like the crazy passenger going through customs with the piles of cookbooks, kitchen gadgets and bottles with mysterious powders. The explanation is so unlike what they usually hear, they let me pass and don´t even attempt to see if the jars really contain what I say they do.

This peanut skillet blondie is the stuff of rainy afternoons, friends, mismatched spoons fighting for the center spot, oohhs and aahhs. 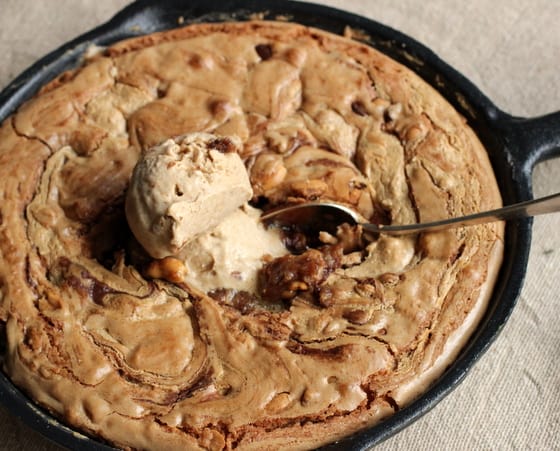 A good dark chocolate, cut into uneven chunks works best here, but chocolate chips can beused.  The flavor of ice cream is up to you.