A fantastic twist on the traditional challah bread. It's much sweeter and can be made as a braid or loaf. You'll love it either way!

When you have your own business your home tends to, at some point, end up invaded by things/stuff/junk related to said business. Unless you're very, very organized, have a lot of extra space or are so disciplined that you manage to separate both worlds even when working next room from where you sleep, there is a huge chance you will eventually exchange much needed personal space for work related spaces all over your house.

In other words, your home will be overtaken by you business junk.

The tricky thing is to realize this before it takes over your life and you feel like you're living in a warehouse. The former will hardly happen unless you're very disciplined or organized, in which case you won't be writing a post like this one in the first place.

But one area that is always pretty organized both in my house and in my mind are cookbooks and food-related magazines. I know my recipes; you'd be amazed at how I remember where a certain recipe was, even if it's from a magazine, and I have hundreds. Well, most of the time anyway. So, after selling the cafe, narrowing down my textile clients which allow me to focus and not have a million fabrics and projects going on at the same time, my house is starting to get rid of clutter or stuff from those 'in-between moments' when you don't know where you're going and feel the need to keep everything.

Add to that the recent flood that hit my neighborhood and arbitrarily rid my house of things, whether I wanted or not. Some were welcome, some not so much. But there were no options.

Now, I can say I'm considering taking advantage of this sort of clean slate that I have been forced into. It's not so simple, it's very confusing and maddening at times, but it's permeating my mind during the day and keeping me awake during the night. Big changes are a certain thing in my life in the next months. Let's see where they take me.

So I will share this comforting cinnamon sugar challah. Every time I bake with cinnamon, bread especially, the word comfort comes to mind, floating in a sea of confusion and change, it´s a nurturing feeling I need a lot  of right now.

Without getting into any deep thoughts, baking bread usually finds me at either end of the stick, very energetic or very meditative bordering sadness. And it lifts me up or enhances the happy feeling.

There's never a bad moment when it comes to bread baking. And challah is one of my favorite, not only because it tastes great but because it's extremely versatile, both in itself and as a leftover. Any bread pudding is made better with it. French toast is amazing with a piece of eggy challah. It makes the best ham and cheese grilled sandwiches. Not to mention croutons. Or the most decadent caramelized apple upside-down bread pudding.

I baked this bread more than a month ago, one day when I still had fresh peaches, and found the need to perpetuate them in some way. First I made the peaches in vanilla syrup and then set out to make a fresh peach challah, which I haven´t had the time to post yet. There was a variation of cinnamon sugar challah in the book, so in a heartbeat I decided to divide the dough and make both.

I had just seen a fantastic chocolate bread in Shulie's site and this braided estonian kringle in Lora's site, so I went with that idea and let's just say that cinnamon sugar is meant to be baked in direct contact with the heat, as it caramelizes and becomes a crunchy, fragrant surprise. Bake it in any shape you want, and add other spices too or nuts. It makes the day brighter. 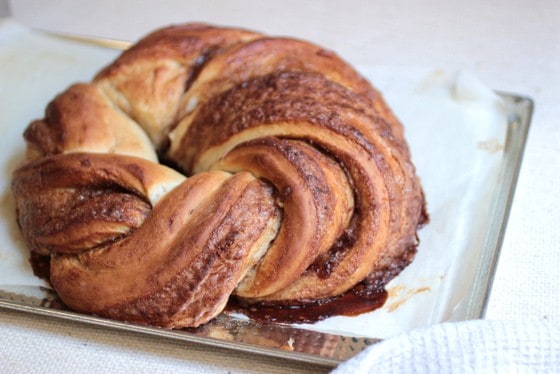