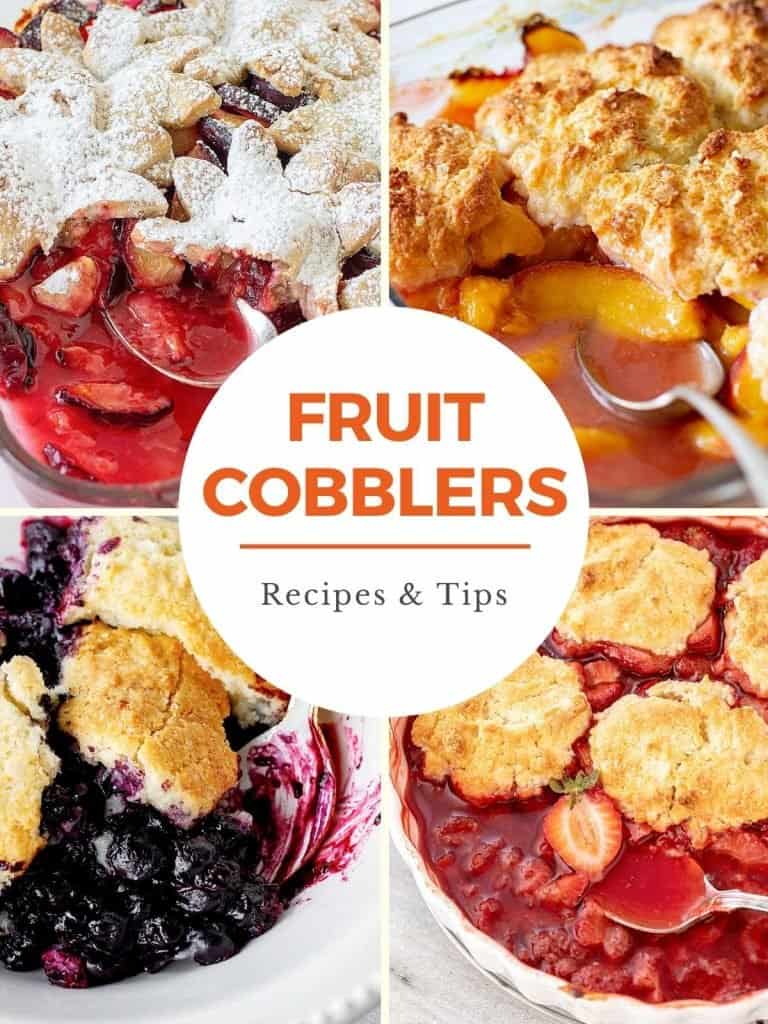 Cobblers are one of the easiest desserts to make with fruit. They come together quickly, can be made ahead, and the combination of flavors is huge. They're perfect for using seasonal fruit but can also be made with frozen. Use this guide with recipes and tips to make them your own!

What makes a cobbler a cobbler?

The biscuit topping that bakes resembling cobblestones is the trademark of this dessert. And the reason it's called that way.

This is achieved by using a rather stiff dough (with flour spots sometimes) that is spooned or dropped in mounds over the fruit and doesn't expand too much during baking. It doesn't cover the filling completely.

That said, there are different types of cobbler recipes.

A cobbler has a fruit layer and a starchy topping. The fruit bakes and releases juices as the biscuit topping is baked, creating a syrupy filling and a sweet, tender upper crust. A fantastic combination if you ask me.

I like biscuit dough because it's soft and fluffy inside but turns golden brown and is crunchy on top. But there are small details, usually in ingredients, that can result in quite different toppings.

In a large bowl put the dry ingredients (flour, salt, and baking powder) and add the cold butter pieces. The next step is to integrate the butter into the flour mixture and this means that it has to be broken into small pieces but it should stay as cold as possible. So touching it lightly, as little as possible, and getting the job done as quickly as possible is important. We have 3 choices:

It's my favorite way because it's the easiest and the results are perfect!

I make the strawberry cobbler that way and most of the biscuit toppings that call for cold butter can be made with melted. Simply combine the dry ingredients and then add the melted butter together with any other liquid that the recipe calls for.

Other cobbler-type desserts where I also like to use it melted are dump cakes. I found that stirring the cake mix with it (rather than topping it with sliced cold butter) creates a much better topping.

This is an old-fashioned way of making this delicious dessert and a great way to use leftover pie crust. It consists of a layer of juicy peaches in syrup topped with a lattice crust (you can also use dough cutouts) that bakes to a golden brown. It can be made in advance and kept refrigerated or frozen.

The traditional way is making a lattice on top of the fruit, but any shape works. We make the plum cobbler with cinnamon dough cut into flowers (below).

Vintage Kitchen tip: make sure the pie crust is cold when you roll and cut it. Have the filling ready so the cobbler goes into the oven as soon as you add the top layer.

We can say that the following desserts are all part of the same family. Some are siblings and some are cousins, but they all have a layer of fruit and a layer of floury topping.

What is the difference between a dump cake and a cobbler? Dump cakes are also referred to as cobblers with a cake mix because that's the ingredient used for the topping. So they are definitely closely related.

What is the difference between a cobbler and a Pandowdy? I think of a pandowdy as a sweet pot pie because the filling is cooked before going into the oven and it's completely (or almost) covered by pie crust.

What's the difference with a fruit crumble or crisp? Both have a crumbly topping that doesn't have liquid among their ingredients. So it's a drier kind of top layer.

What is the difference with a brown betty? What's unique about brown betty is that the fruit is layered with a crumble mixture. It's less related to a cobbler and more to a fruit crumble. I have a very old recipe for a peach blackberry brown betty posted (sorry for the small images and lack of text) that I need to update. But you can get an idea of it.

What is the difference between a cobbler and a pie? The latter has a bottom crust that encases the filling and that's the main difference. A cobbler with pie crust on top is the most similar, like an inverted pie.

You can flavor the fillings and toppings to match your own palate. So be inventive and let your imagination fly by using citrus zest, ground spices, extracts, or even some favorite liquor. Make the cobblers your own. 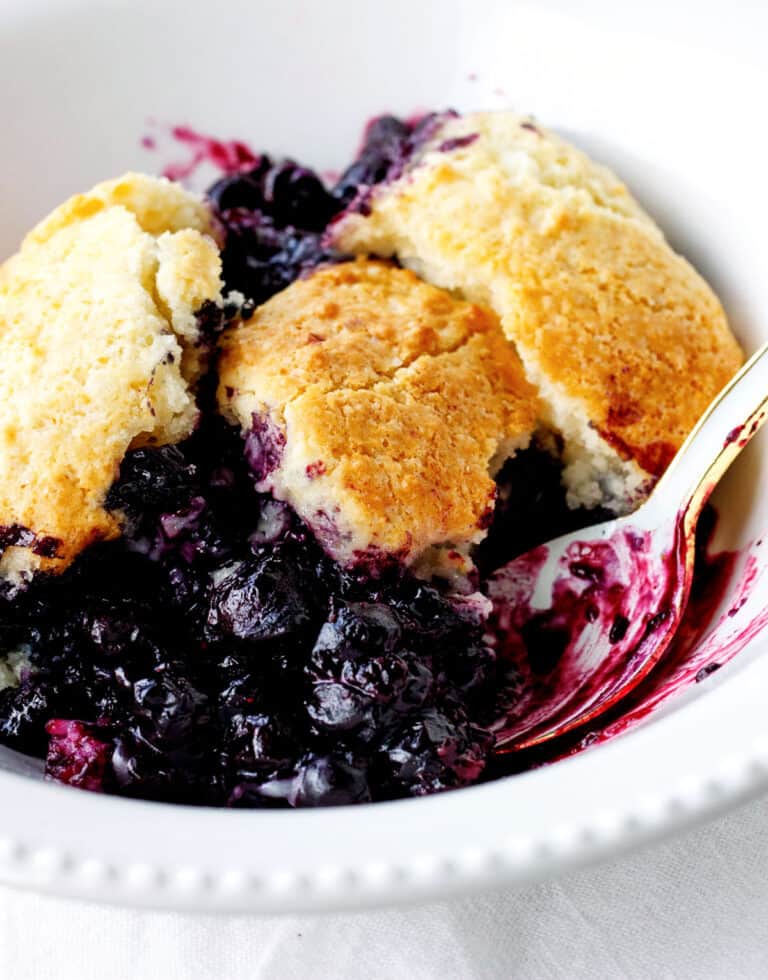 This is one of those easy dessert recipes that checks both the quick and tasty boxes, with a golden brown topping and a layer of sweet fruit filling. It comes together quickly and is ready in under an hour! 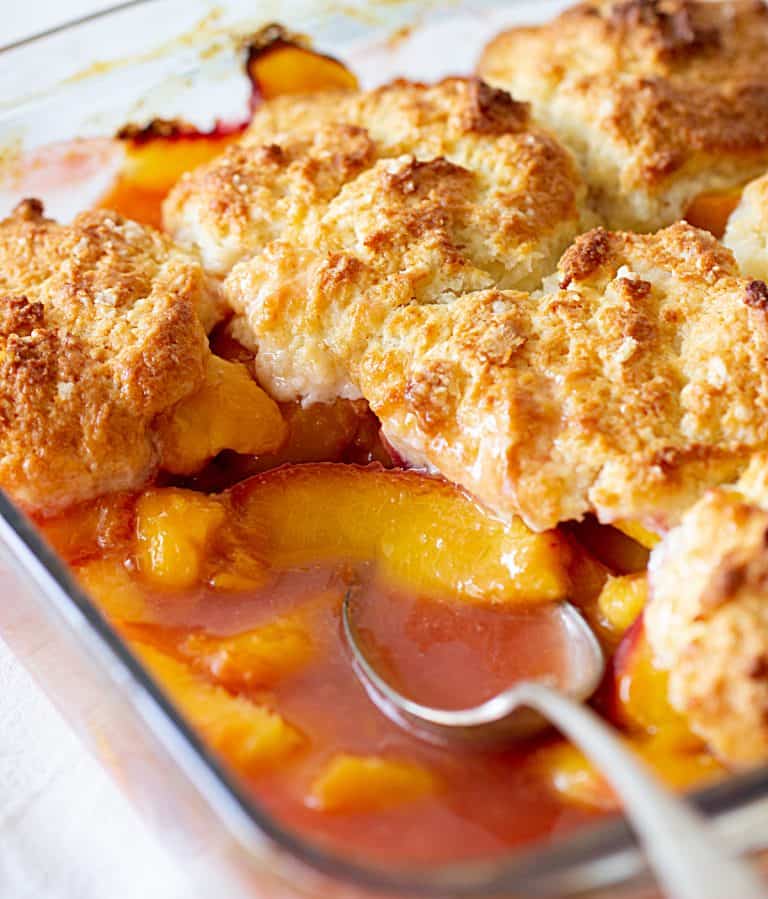 The search for the best peach cobbler recipe is over. This is all you asked for: juicy fruit that makes its own syrupy brown sugar sauce as it bakes and a super simple biscuit topping that is buttery and crunchy. And it's out of the oven in an hour, tops. 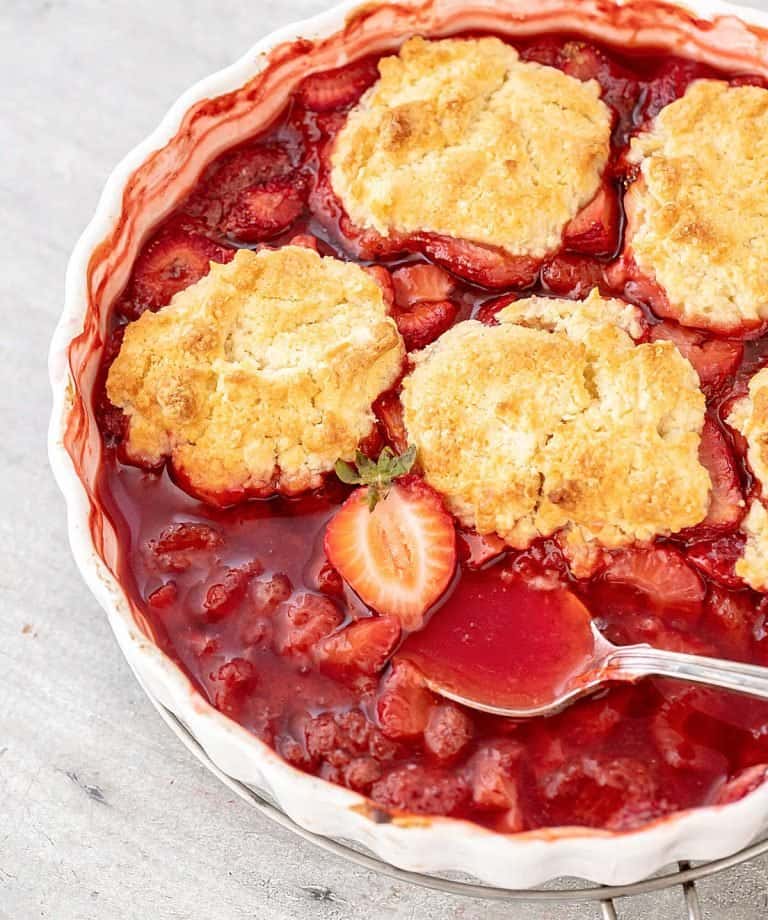 This easy recipe brings out the best of seasonal fruit and involves little time in the kitchen. Juicy, sweet berries are topped with biscuit dough and baked until golden brown to produce a scrumptious dessert. You can also use frozen strawberries. 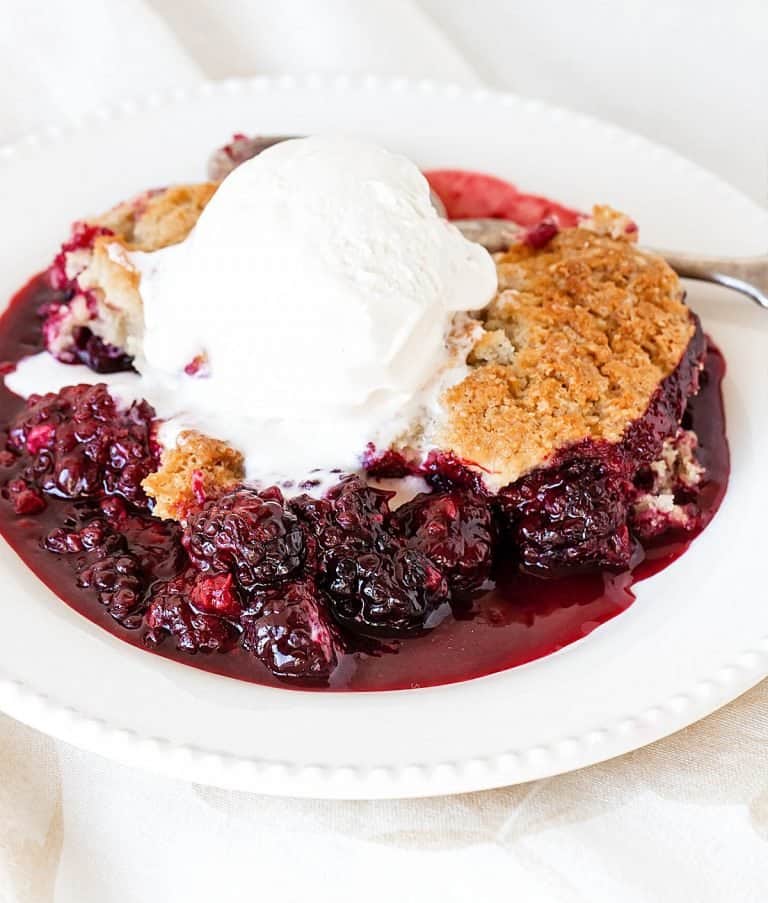 An old-fashioned recipe with a layer of juicy blackberries and a golden biscuit topping. It's fantastic served with a scoop of vanilla ice cream. You can have it ready in an hour and can be made ahead. 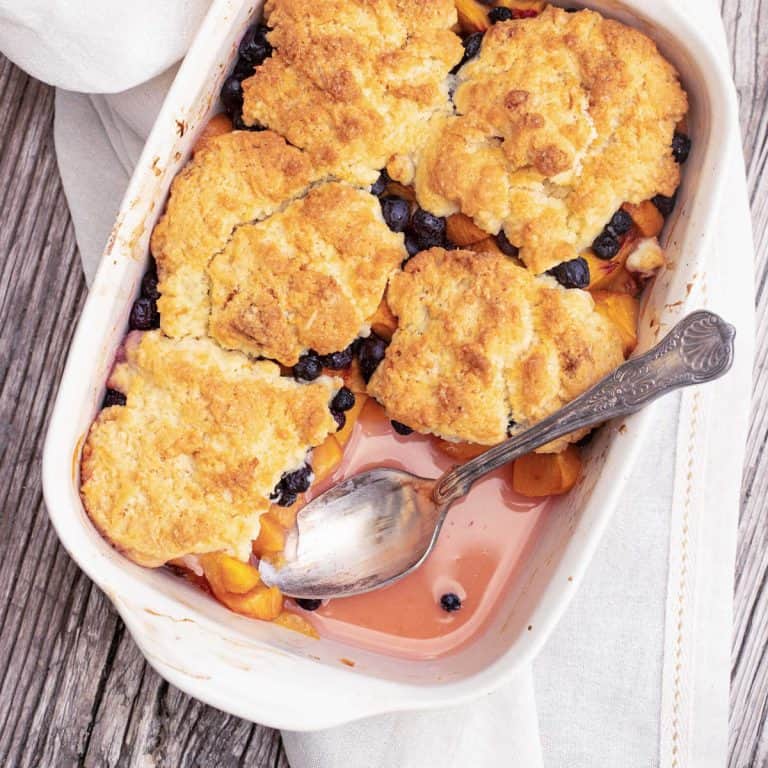 This easy cobbler recipe showcases the flavors of fresh peaches and blueberries in a dessert everyone will love! It consists of a juicy fruit layer topped by a biscuit dough that bakes to a golden brown and is wonderful served with a scoop of vanilla ice cream. You can use fresh or frozen fruit and 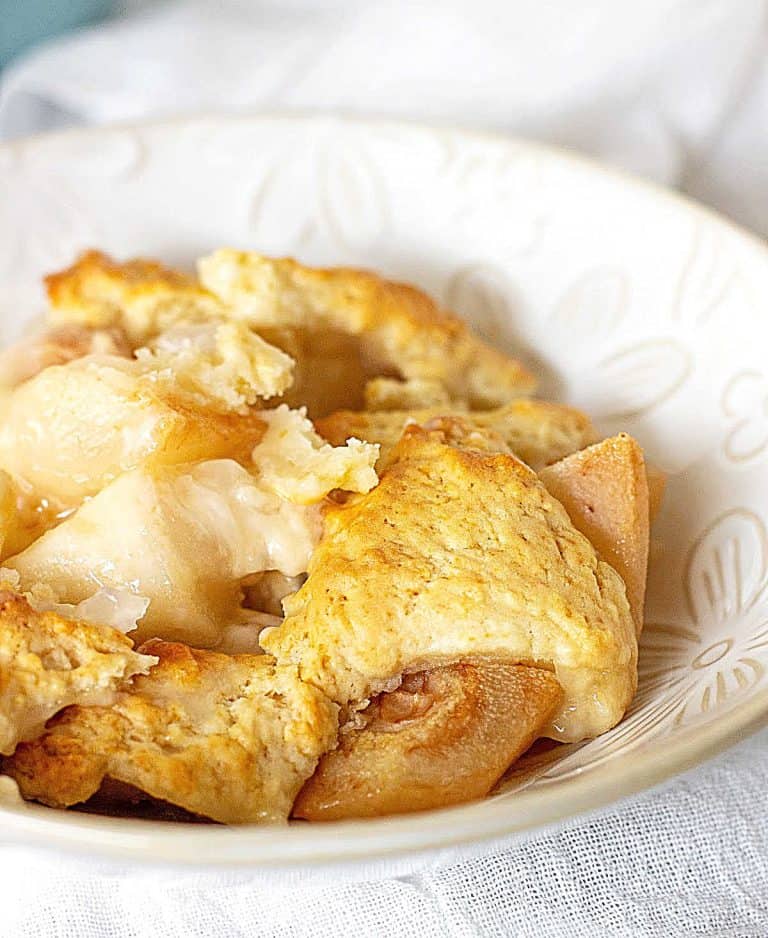 As soon as Fall starts I highly recommend making this pear cobbler recipe for dessert. It has a bottom layer of sweet, juicy, fresh pears that are smothered with an amazing tender biscuit topping! A fantastic fall dessert I'm sure you'll want to repeat often during the season. 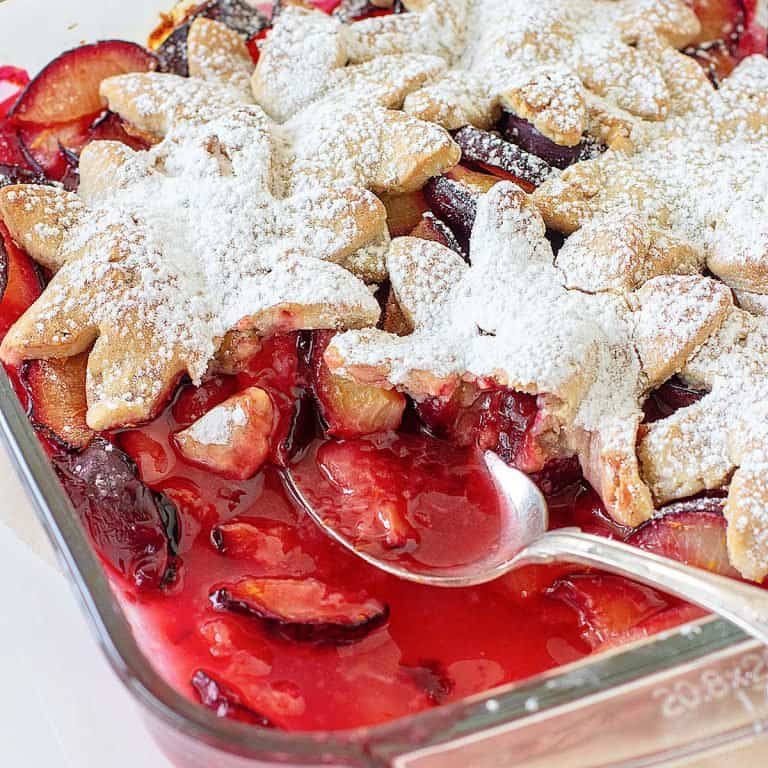 This is one of the best desserts I make during plum season. The juicy plum layer bubbles up during baking creating a fantastic syrup! Make the cinnamon crust or use your favorite one. 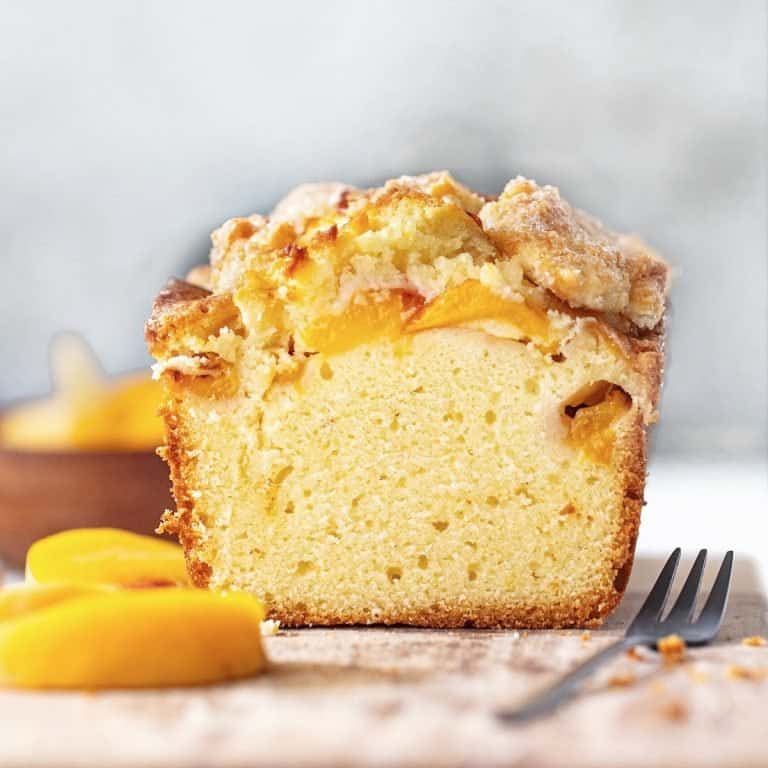 This cake combines a soft but dense peach pound cake with a cobbler topping. The vanilla batter has a thick layer of fresh peach slices and creates a biscuit-like crust as it bakes. Great for a potluck or picnic.