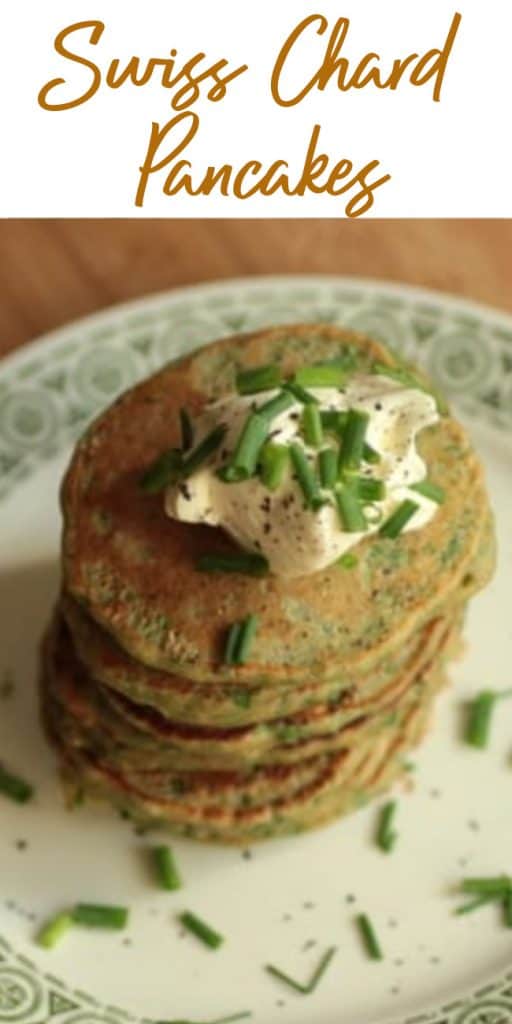 Oh, that I have these soft and delicious swiss chard pancakes to post is a miracle. But they are the easiest ever made in the blender! Have them ready to eat in 15 minutes!

This tumultuous month of April is coming to an end and things in the kitchen are slowly going back to normal, whatever that means. After being completely absent from any baking or cooking, this past week I made some homemade marshmallows, the best chocolate cookies ever and a few cakes.

Anyway, on to these gorgeous little pancakes made with swiss chard.

They are our selected recipe for today's French Fridays with Dorie group. Let me tell you these are some lovely pancakes as a side dish or a light meal. A great way to eat your greens.

Looking through my posted recipes, it turns out I have very few pancake recipes.

Table of Contents Hide
What is swiss chard?
About this pancake recipe.
Steps for making this recipe.
Swiss Chard Pancakes

What is swiss chard?

It is a green, leafy vegetable that can be grown most of the year, but usually peaks during the summer months. The leaves go from a lighter green (image above, left) to a dark reddish tone. Same with the stalks.

It is highly nutritious, as most dark greens are. It can be used in soups, smoothies, tarts, pancakes and many other recipes.

The poor vegetable has a very bad rep in this country, mainly because, for the longest time, restaurants and shops used to sell it saying it was spinach. Any ravioli or cannelloni filling that said green vegetables had cheap swiss chard instead of pricey spinach. Pig in a poke.

About this pancake recipe.

Flour: I used whole wheat flour but you can use all-purpose white flour or even alternate with another such as buckwheat.

Sometimes I get this need to think I'm eating healthy, and for some reason, these swiss chard pancakes got caught in one of those days. Maybe it was the fact that my swiss chard was organic. I finally found a few places that deliver a lot of organic stuff, and a place where to buy it that's close to my house. It's not an easy thing in this city, to eat organic just like that.

Blender: the mixture is made in the blender and doesn't take more than 10 minutes between washing and measuring.

Steps for making this recipe.

One of the main ingredients for flavor is the onion/shallots that are added. They round out the whole thing.

Other recipes you might like:
The Best Buttermilk Pancakes
Cornmeal Berry Pancakes
Basmati Rice with Salsa Verde
Sesame Peas and Green Beans 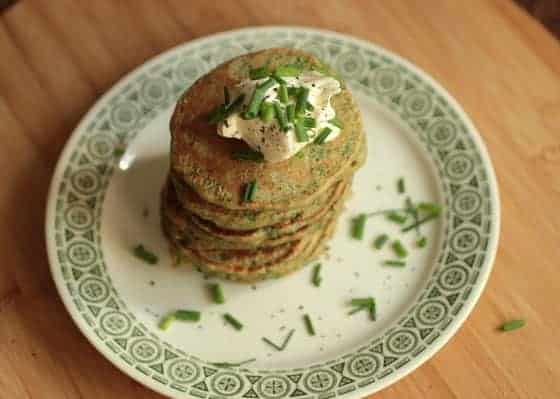 Have ready a large skillet.

In the jar of a blender, put all ingredients except for the chard.

Blend until smooth and creamy.

Blend until mixed but don't completely pulverize the greens. It's nice to have some small pieces. Or not. It's up to you.

Let stand while you preheat the skillet over medium heat.

Drizzle a small amount of oil on the hot skillet and test it. A drop of batter should sizzle immediately.

Drop between ⅛ and ¼ cup of batter onto the skillet for each pancake. Depending on the size of your skillet you will be able to make 3-4 at a time. But don't overcrowd, leave room to flip them.

Cook until beginning to bubble and dry and curl at the edges, and flip over.

Eat immediately with seasoned sour cream and some chopped fresh chives or herbs.

If making a large batch, keep them warm in the oven while you prepare them.

Freezing: they freeze really well, I still have some in my freezer, all neatly stacked with plastic squares between them. Just reheat them in the oven at a low temperature, add a dollop of seasoned creme fraiche and eat.

Seasonings: add some spiciness with a pinch of paprika, or a tablespoon of fresh chopped herbs to the blender.